The Ribando Clan is packing up and heading to New Mexico for my niece’s 5th birthday. Flight leaves at 6am from Newark, connects in Chicago, and land in ABQ 6.5 hours later with a time change of two hours. I’m going give a brief pause here to let the magnitude of that sink in.

The perfect storm of disrupting sleep and a long day of air travel, it’s not a matter of “if” one or both kids lose their shit, it’s a matter of “when”. In preparation, I spent the last two nights putting together these gift bags for the other passengers on the plane to apologize for the inevitable fits: 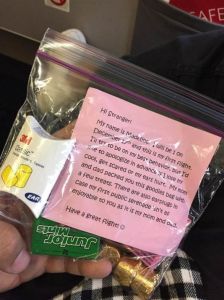 JUST KIDDING. Not that you really fell for that anyway. But seriously, who decided that this is a f’ing thing? Pinterest, I love you but you’ve gone too far. In addition to packing our entire house into one large suitcase, coming up with enough in-flight entertainment to keep my toddler with a 5-minute attention span preoccupied for 6.5 hours, and packing the snacks without eating them, I have zero time or desire to take on a project of this magnitude.

I get that it’s annoying to be on a flight with a screaming kid but do you think the parents are living it up? No. They are in hell. A hell at 36,000 feet from which they cannot escape. A hell of their own making because they dared to dream and go outside the confines of their house. You know what I want to do? Buy a bunch of plastic poo and tie a note to it that says “There are kids on this plane. Tough shit.”

However, that fake crap is more expensive than I thought and I literally cannot fit another thing inside of the diaper bag. Instead I put together a survival guide with helpful tips I’ve learned based on the handful of times I’ve flown with AJR (twice solo), which of course makes me an expert. If you do decide to take the plunge and fly, may this prove of some use to you on your journey.

PS: If you’re one of those families with the kids that sweetly pull their suitcases in an orderly fashion through the airport and sit quietly on the plane without demanding lollipops – I hate you. But I also want to be you. Teach me your ways. It’s sedatives, right?

6 thoughts on “How To (Barely) Survive Flying with Small Children”

The last three years have passed by in blur. My blog has functioned as this space for me to manage all the swirling thoughts on motherhood that would otherwise consume me. It’s been a light on my darkest days and a huge source of laughter when I actually put the crazy antics of two toddlers into writing. I have loved writing and will hopefully will still do it in some capacity, however, it felt right to protect the kids and make their lives more private. Especially with my oldest entering kindergarten in the fall. Ive said a proper, bittersweet goodbye on the blog (full link in profile). . . . #momblogger #sayinggoodbye #momsofinstagram #nowandthen
Days move at a snail’s pace. Years in a blink. We beg for time to speed up and then to slow down. Time wears us down with the daily grind of caring for smile children all the while whittling our chubby-cheeked baby into a long, lean boy without us even noticing until it’s too late. My oldest is graduating from pre-k in a week and starting kindergarten in the fall. I am equal parts excited for him and devastated for myself as my little boy continues to grow at a rapid rate. Why is that we can’t fully appreciate each stage of our kid’s lives until it passes? More emo musings up on the blog (link in bio) . . . #motherhoodunplugged #growingpains #boymom #prek #momblogger
Today is the day. After 3.5 years of pacifier use I’ve finally decided that it’s time for us to say goodbye. They always say that these things are harder on the parents and there may be some truth to that. However, Olivia’s obsession and general stubbornness have me fearful that this could be a rocky weekend. There’s a part of me that does feel a little guilty about taking away her #1 comfort object ... but it’s time. Growing up isn’t easy to do, however all the bribes and rewards should make it a little more bearable, right? . . . #pacifier #toddlerlife #princessanna #growingpains #momprobs
1. Ability to look adorable in pigtails 2. Ice cream sandwich consumption that does not impact waistline 3. Naps 4. Unwavering confidence in ones self and abilities 5. Fabulous hand-picked wardrobe It’s for these reasons and many more that I wouldn’t mind being a toddler for a day. They seriously have it so made and they don’t even know it, am I right? So for this Mother’s Day if you catch me throwing a tantrum because I was given the green fork instead of the blue, you’ll know that my dream of becoming a toddler for the day actually came true. More reasons why toddler life is the best life on the blog (link in profile) . . . #toddlerlife #mothersday #trolls #momblogger
Originally I made superhero capes for the kids out of chalk to take photos in an attempt to be artsy. However, I decided it’s much more fun to be FARTSY (see what I did there?) clearly my sense of humor hasn’t advanced beyond second grade, which is probably why my kids think farting is so hilarious. I wrote a totally unnecessary blog post that I giggled the whole way through about our infatuation with flatulation (link in bio) . . . #fartsarefunny #chalkart #chalkfart #icanthelpmyself #toddlermom
With the world's longest spring break ever, I haven't been able to find the time to write a full post but I did have some thoughts / feelings. Last week's trip to Ohio was an exhausting flurry of activity, but so wonderful that every memory made was totally worth it. The one thing that I loved the most was the chance to parent alongside my sister Something I really miss living so far apart. When we're together there's no need to put on airs. We don't judge, instead we just get sh*t done. The unconditional, unquestioning love for each others' children is so palpable you can feel it when you're in the room with us. It doesn't matter whether it's my kid or hers who needs a snack or a hand held in the parking lot, whoever is closest takes that on without having to worry about whether this is a favor to be paid back one day. We moved along seamlessly like a pair of synchronized swimmers, rarely needing to talk or ask questions of each other. One of us would cut up fruit, the other set up four plates for lunch and both of us showcased a patience with the kids that seemed renewed in each others' presence. While we text almost daily, primarily in GIFs that perfectly summarize our mood for the day, it's not the same as physically being there to be each other's wingwoman. . . . #sisterhood #motherhood #coolmom #ittakesavillage @swedishcookie4